How to Pair Wine with Food How to Pair Wine with Food By Leslie Radford When it comes to wine there are three basic rules: Pair red wines with red meat, white wines with white meat and sweet wines with desserts. But let’s take it a step further. All the flavors in the food have an effect on the taste of […] Tips for a Fun Old-Fashioned Dinner Date  By Leslie Radford  It’s been months since you and your sweetheart have been on a date. Between work and honey-dos, you haven’t made time to just be together. You need a break from the kitchen making the same dinners night after night and an old fashioned dinner date […]

How to Embrace Meatless Mondays How to Embrace Meatless Mondays By Leslie Radford   A national campaign back in 2003 launched an initiative to get Americans to eat more fruits, vegetables, and whole grains. Their survey concluded the U.S. was eating way too much meat – 222 pounds of meat per person per year, which is double the recommended amount. […]

What is the Difference Between a Spring Roll and an Egg Roll? 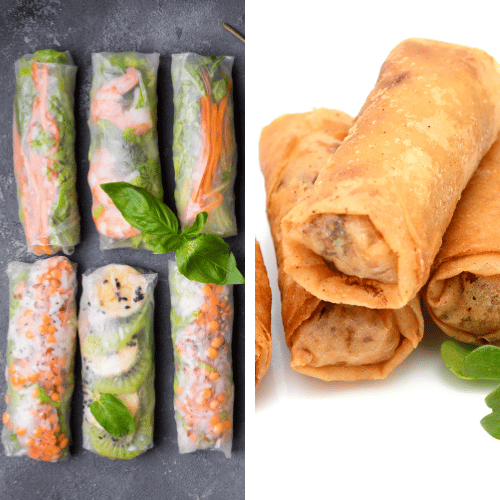 What is the Difference Between a Spring Roll and an Egg Roll? By Leslie Radford Chinese food in America is very different to Chinese food in China. American Asian restaurants have adapted to suit American palates. Many American-Asian cuisines offer fried foods, which is not custom in Asian countries. So if you’re not bothered by […]

How to Drink Sake How to Drink Sake By Leslie Radford Sake is a fermented beverage that is often misunderstood by the American population. Often described as a rice wine, sake is actually brewed differently from wine. There are many ways to enjoy this beverage. What is Sake? Sake is a traditional Japanese drink that is made by fermenting […]

A Brief History of Sake A Brief History of Sake By Leslie Radford Sake is a traditional Japanese alcohol made from fermented rice. Traditionally, sake is served during formal ceremonies, special events, and national holidays. It is typically poured from a tall bottle called a tokkuri and drunk from a sakazuki, a small porcelain cup. The correct way to pronounce […] The Top Health Benefits of Eating Sushi By Leslie Radford Key Takeaways Sushi May Help You Manage Your Weight Rich in Omega-3 Fatty Acids Speeds up Muscle Repair Strengthens Your Immunity Taste the Benefits of Sushi As a sushi lover, you already know it’s delicious. But get your chopsticks ready because here are 5 reasons […]

How Rice Became a Staple in Asian Cuisine

From steamed rice, fried rice, rice noodles, to sticky rice, you’ll see rice in many dishes when it comes to Asian cuisine. Ever wonder why that is? BFF is here to explain the history of rice in Asian culture.   The History of Rice Rice originates in East Asia, tracing back more than 10,000 years […]